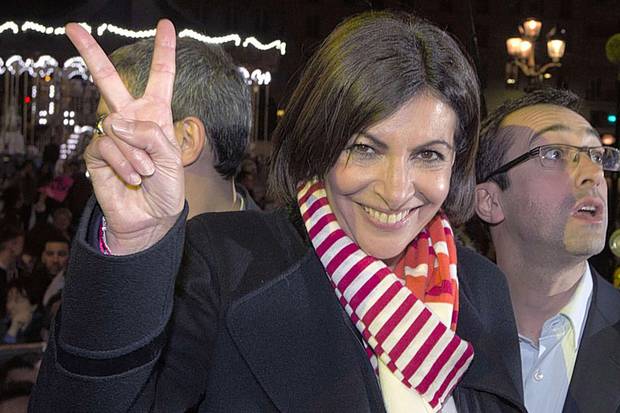 If you were looking for a politician who personifies Paris in 2014, Anne Hidalgo would be spot on. Yesterday Parisians elected Hidalgo, a Socialist, as their first ever woman mayor: she beat conservative rival Nathalie Kosciusko-Morizet, with some 55 per cent of the vote in the second-round run-off. The romantic French capital has always been a feminine one compared with macho London, and it is right that a woman is finally in charge.

Like the City of Light, Hidalgo works hard to maintain her glamorous image — and has a cosmopolitan history behind her. The 54-year-old mother-of-three is from a Spanish immigrant background, born in Andalucia. As a prominent Socialist Party politician, Hidalgo is naturally Left-leaning and reformist but she has a tough pragmatism about her too.

While London Mayor Boris Johnson did not look out of place waving two Union Jacks when stuck on a zip wire during the 2012 Olympics, Hidalgo likes to see herself as a more refined public figure. In this, she reflects her city’s understated, sometimes aloof image — one that prompts accusations that it is resting on its glorious past without challenging its more exciting, risk-taking neighbour.

It is a contrast that some Parisians are uncomfortably aware of. As Claire Trichet, an 18-year-old first-time voter, told me during yesterday’s poll: “Paris is often viewed as being a bit of a museum, and Anne Hidalgo could be portrayed as a curator. Of course we’re delighted that a woman is finally becoming mayor but she always comes across as a bit of a plodder.”

In fact, London leads the way in every field of civic endeavour, from culture and sport to business and architecture. Detractors claim that Paris offers little beyond its reputation as the world’s most popular tourist destination. The thousands of Londoners who visit every year are impressed by the Louvre, the Eiffel Tower and even Disneyland. But as Hidalgo knows only too well, the infrastructure is also decaying as quickly as many of the gold-stoned buildings.

Just look at the difference between the gleaming Eurostar hub at London St Pancras and the run-down Gare du Nord, with its single, often broken escalator leading up to the ticket barriers. Jean-Claude Delarue, a Paris-based transport activist and academic, points to the increasingly dangerous, overcrowded local trains, including the ageing Métro.

“There are huge problems for all passengers, from commuters to tourists,” says Delarue. “Many parts of our transport system have not updated at all. Delays and cancellations take place all the time. These are the kind of practical issues which Hidalgo has to deal with as a matter of urgency.”

As chief executive of a city with a £6 billion budget, 50,000 employees and a population of just over two million, Hidalgo will certainly not get away with standing still. That is something Paris Socialists have been accused of doing for far too long, despite the hapless Kosciusko-Morizet’s failure to unseat them yesterday. Beyond gimmicks such as the annual summer “beach” by the River Seine, and the Vélib’ bicycle scheme, Hidalgo’s 13 years as deputy to outgoing mayor Bertrand Delanoë have for the most part seen a bloated and expensive bureaucracy doing very little.

Their party’s nationwide drubbing in yesterday’s municipal elections will not help Hidalgo, even if her win offers the Socialists a sliver of consolation. The disastrous economic policies of her ultimate leader, President François Hollande, opened the door for a range of alarming developments, including widespread gains for the far-Right National Front, which now has at least 11 mayors across France.

As in so many other parts of the country, Paris is suffering serious social ills, from sky-high unemployment, especially among the young, to homelessness and an escalating crime rate.

Hidalgo, who gave up alcohol and started going to the gym during her electoral campaign, says she is set on changing her city’s image as a playground for the super-rich. Grand schemes include turning Avenue Foch, the gilded thoroughfare where oligarchs and foreign despots own £100-million mansions, into an ambitious green zone where ordinary people will be able to “breathe”.

Other proposed anti-pollution measures include cutting down on car use while laying on hundreds of free mopeds. Her success involved an alliance with the Green party, so these policies will now be particularly important. Hidalgo also wants to pay for 5,000 new crèche places, and build 10,000 new homes, especially for the poor and vulnerable.

Yet, unusually for a French Socialist, Hidalgo insists she won’t be raising local taxes — something which has left many questioning her credibility: it is not clear where the money for all her proposed projects will come from.

In truth, with limited funds available, there is little hope of Hidalgo making any great impact. Paris City Hall is by no means a teeming cauldron of ideas or can-do spirit. Thirteen years of Mr Delanoë’s brand of socialism have been characterised by stagnation and missed opportunities. Hidalgo, who accompanied Mr Delanoë through many of his failures, has shown nothing so far to suggest she will be an improvement.

“It is complete nonsense to say that Paris has fallen behind London,” she protested in a recent interview — while also making the unlikely claims that Paris has more start-up firms and provides better weekend shopping.

Last night, as her party’s disastrous results flooded in from all over the country, Hidalgo heralded hers as a “great victory”, one which would prove that a female Socialist can indeed lead an iconic European capital to greatness. But as she attempts to live up to that pledge, it will not only be Anne Hidalgo and her low-achieving Socialist Party which need shaking up, but Paris itself.